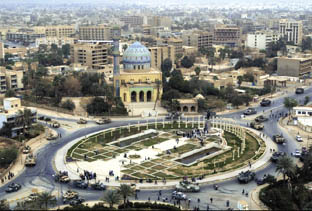 We see the tanks but no crowd.
Downtown Baghdad occupied by US tanks (Alquds, 4/10/03). 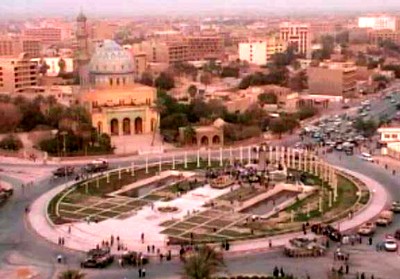 This wide-angled photo shows that the
'cheering Iraqis' television coverage was staged.

The up close action video of the statue being destroyed was broadcast around the world as proof of a massive uprising. Still photos grabbed off of Reuters show a long-shot view of Fardus Square... it's empty save for the U.S. Marines, the International Press, and a small handful of Iraqis. There are no more than 200 people in the square at best. The Marines have the square sealed off and guarded by tanks. A U.S. mechanized vehicle was used to pull the statue of Saddam from it's base. The entire event is being hailed as an equivalent of the Berlin Wall falling... but even a quick glance of the long-shot photo shows something more akin to a carefully constructed media event tailored for the television cameras.

Look the 'crowd' over the road.
A statue of Iraq's President Saddam Hussein falls
as it is pulled down in central Baghdad April 9, 2003.
U.S. troops pulled down a 20-foot (six metre) high
statue of President Saddam Hussein in central Baghdad
on Wednesday and Iraqis danced on it in contempt for
the man who ruled them with an iron grip for 24 years. REUTERS 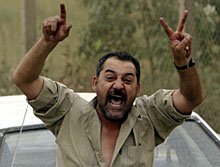 This guy looks very similar to a man in the photo below
An Iraqi man greets advancing U.S. Marines on the way to the
centre of Iraqi capital Baghdad April 9, 2003. REUTERS/Oleg Popov
http://www.arabnews.com/WebExclusives10.htm 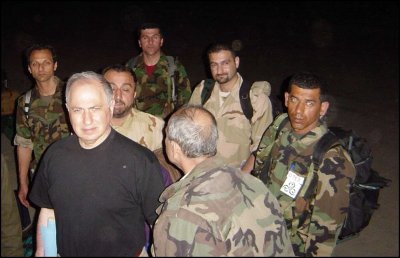 Ahmed Chalabi, left, arrived Sunday at an air base near
Nasiriyah in southern Iraq with members of a militia called the
Free Iraqi Forces. (Free Iraqi Forces Photo Via AP)

DOKAN, Iraq, April 7 -- It was a motley group of freedom fighters filing aboard four C-17 military transport planes at a remote airfield in northern Iraq last weekend. Some of the 700 men of the newly dubbed 1st Battalion of Free Iraqi Forces -- vaunted as the kernel around which a new Iraqi army would be assembled -- were so lightly armed they lacked even pistols, let alone assault rifles.

"Those who went on the planes without guns, I told them, 'Soon you'll have so many you'll have to burn them,' " said Nabil Moussawi, a senior official of the Iraqi National Congress, the opposition group that controls the fighters the United States airlifted to Iraq's south.

"We have an agreement from the United States Army that we will receive all the weapons captured from the Iraqi army," Moussawi said.

The arrival of the INC's mostly Shiite fighters in the southern city of Nasiriyah over the weekend was chiefly symbolic, showcasing Iraqis willing to fight for a free Iraq, Iraqi opposition and U.S. officials acknowledged. Members of the group are expected to perform a variety of tasks, including delivering humanitarian aid and helping to hunt supporters of Iraqi President Saddam Hussein. Continue...

Is this why they bombed non-embedded journalists?

If there is one thing this war has taught us all, it's that we can't believe what we're told. For Donald Rumsfeld these were "breathtaking". For the British Army they were "historic". For BBC Radio they were "amazing".

A wide angle shot in which you can see the whole of Fardus Square (conveniently located just opposite the Palestine Hotel where the international media are based), and the presence of at most around 200 people – most of them US troops (note the tanks and armored vehicles) and assembled journalists.

The BBC website had the honesty to say that "dozens" of Iraqis were involved, but this grain of truth was swamped by the overwhelming impression of mass joy. The radio and TV were even worse.

The masses are no doubt glad to see the back of Saddam Hussein, but this was a US Army propaganda coup, staged for the benefit of the media. British media have swallowed this hook line and sinker. Shame on them.

April 6th: Iraqi National Congress founder, Ahmed Chalabi is flown into the southern Iraqi city of Nasiriyah by the Pentagon. Chalabi, along with 700 fighters of his "Free Iraqi Forces" are airlifted aboard four massive C17 military transport planes. Chalabi and the INC are Washington favorites to head the new Iraqi government. A photograph is taken of Chalabi and members of his Free Iraqi Forces militia as they arrive in Nasiriyah.

April 9th: One of the "most memorable images of the war" is created when U.S. troops pull down the statue of Saddam Hussein in Fardus Square. Oddly enough... a photograph is taken of a man who bears an uncanny resemblance to one of Chalabi's militia members... he is near Fardus Square to greet the Marines. How many members of the pro-American Free Iraqi Forces were in and around Fardus Square as the statue of Saddam came tumbling down?

Messages In This Thread

US Crusade Forum is maintained by Administrator with US Crusade 5.12.


NOTE: In accordance with Title 17 U.S.C. section 107 this material is distributed without profit or payment to those who have expressed a prior interest in receiving this information for non-profit research and educational purposes only. For more information go to: http://www.law.cornell.edu/uscode/17/107.shtml. If you wish to use copyrighted material from this site for purposes of your own that go beyond fair use you must obtain permission from the copyright owner.